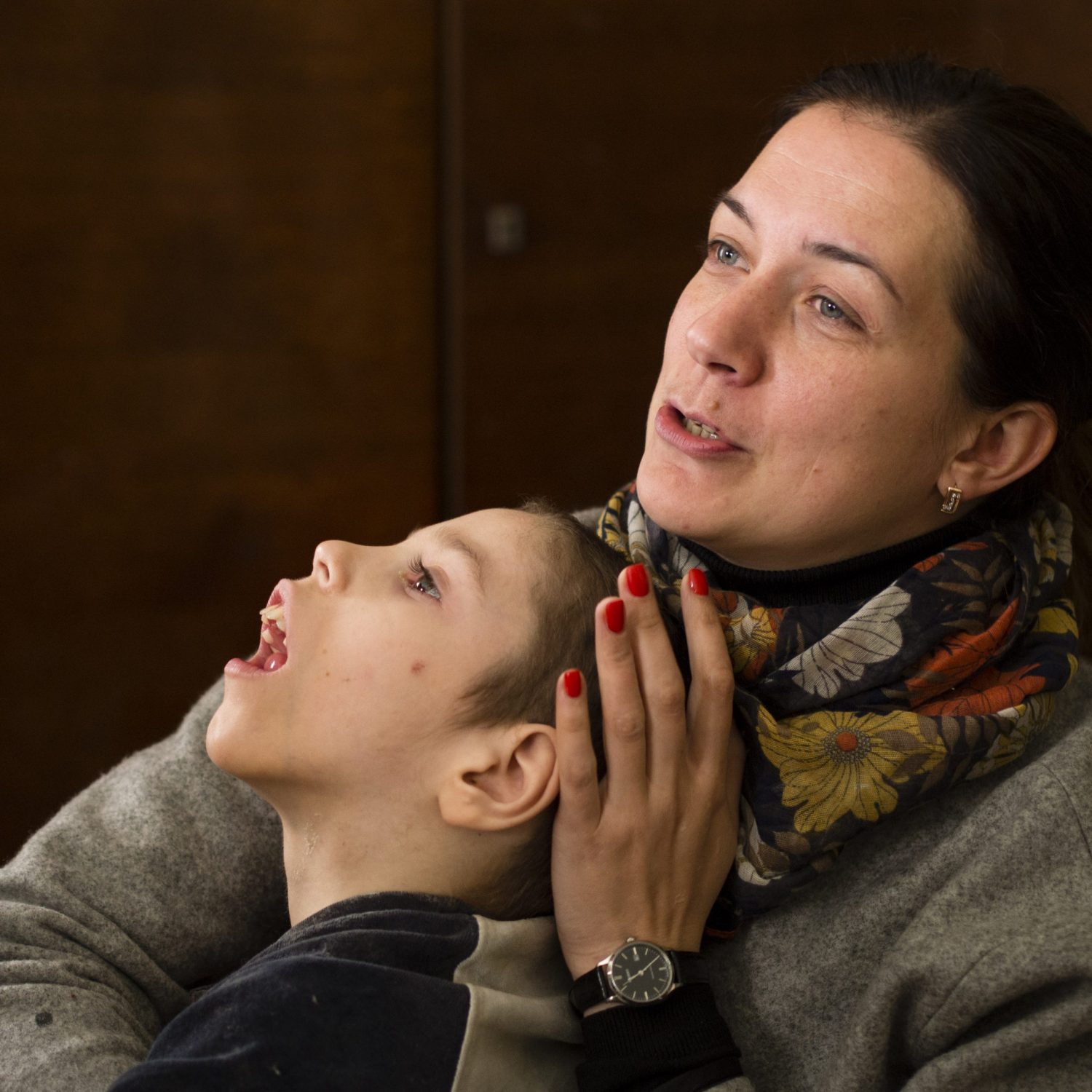 
Our extraordinary, dedicated frontline worker, Tanya Klindiuk, has worked and volunteered in the Chernobyl Region since 2004. This Christmas, she wanted to share some of her experience with you – and share what your amazing help can achieve.  – Adi

I have just returned from visiting one of CCI’s Hospice and Community Care families in Gomel, Belarus. Nastya’s mother Luda and the CCI home care nurse were helping Nastya.

Inhale. Exhale. A constant laboured struggle – the soundtrack to their days. Luda cares for Nastya 24/7. She has seen other children living far away in institutions, when their families couldn’t cope with their severe disabilities. And she has dedicated her life – day after day, week after week – to keeping Nastya at home, alive and out of distress.

It’s not been an easy 18 years. Nastya was born healthy, but a CT scan revealed she was hydrocephalic, and she’s had to stay lying down in her bedroom since she was 7. She also has brain damage and epilepsy. Every 30 minutes, Luda connects her daughter to a machine that suctions out her lungs.

Here in Belarus we are constantly amazed and humbled by donors in Ireland – by your compassion and care. Every day, we see what it can do. Support from Ireland has enabled CCI’s Community Care programme to provide medications, a nurse, and an oxygenator for Nastya. Without it, she would never have been able to leave the hospital.

When I hear about these amazing gifts, I can’t help thinking that the truth is – you are here by Nastya’s side. Keeping her safe. Helping her to take each breath. 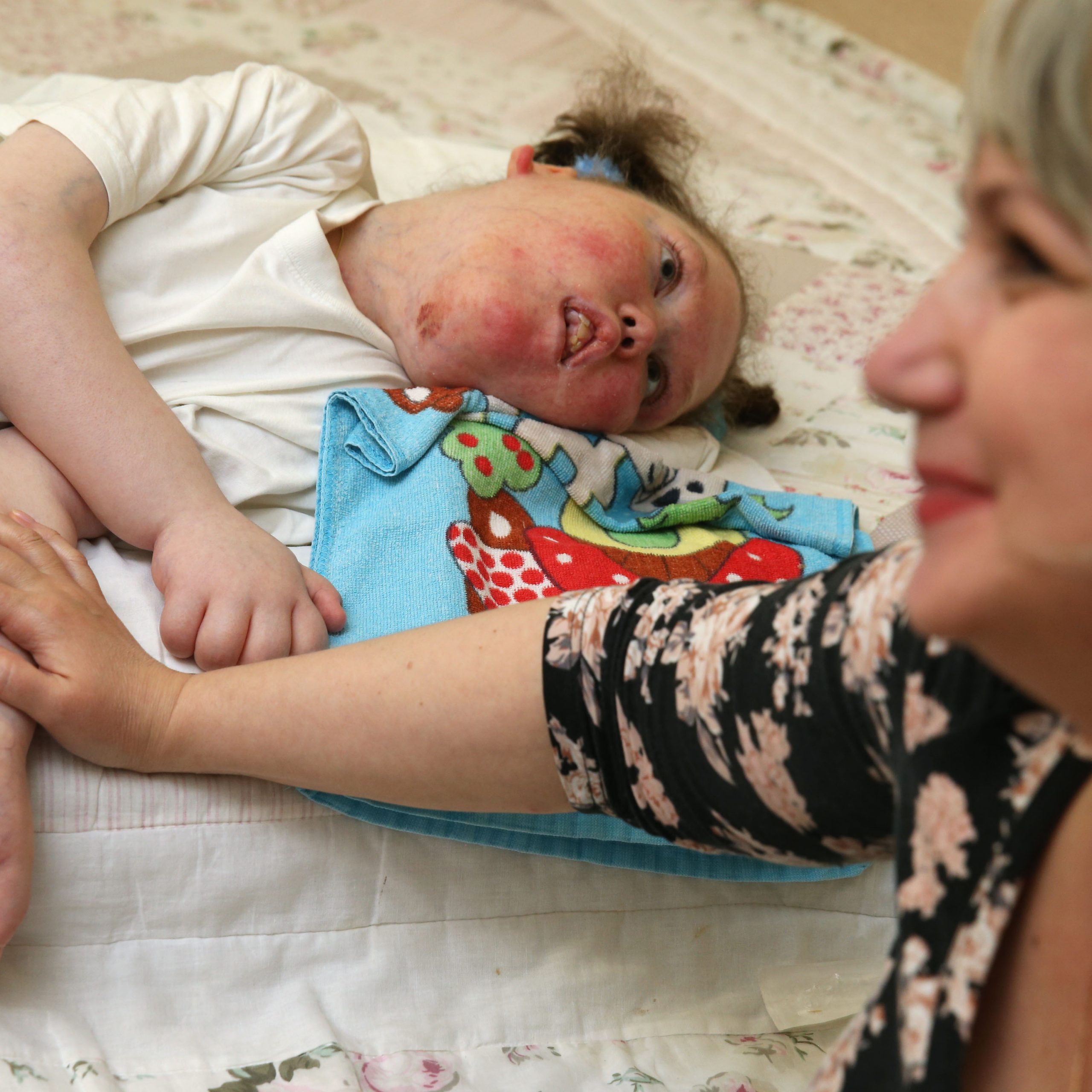 Nastya and her mother, Luda. (Photo by Sean Gallup/Getty Images)

When I first volunteered to help the Chernobyl victims, I couldn’t believe my eyes. None of us knew how horrific things were. It took time before I could hear people’s stories and the pain they were suffering.

But I believe that these realities are so important to share. These Chernobyl lives and their histories are forever.  Nastya’s grandfather was one of the Liquidators who worked as a Chernobyl first responder to contain the explosion in 1986 and stop it from reaching Europe. As a result, he had many severe health problems and eventually got cancer. Tragically, as a result of her grandfather’s heroic work, Nastya is now suffering too.

If you think about it, he helped to protect Ireland and other countries – and now Ireland helps to protect his granddaughter.

I’m sure he never imagined how difficult Nastya’s life would be. It’s not only her physical disabilities that create challenges, but also the constant threat of institutional care. Luda knows that if she can’t provide adequate care 24/7, that’s where her darling daughter will be sent.

Thankfully, the extraordinary response of the Irish people has given her something to hold on to. Your help protects Nastya from pain, neglect and suffering. And it means that more children like Nastya can remain in the loving care of their family homes – at Christmas and always.

It’s such a tribute to you and the people of Ireland that you will respond instantly when someone’s entire future – and their next breath – is in your hands.

I cannot thank you enough for your kindness and generosity. We’re 3,000 kilometres away from you here in the shadows of Chernobyl.

But to me and these families you help, you feel very close. And if you really were here today, in this room, hearing Nastya’s laboured breaths and seeing the frightened yet hopeful look in Luda’s eyes, I know you would not hesitate to continue the incredible legacy of kindness and care that you have built here.

Thank you for making sure these “forgotten children” of Chernobyl are never forgotten.