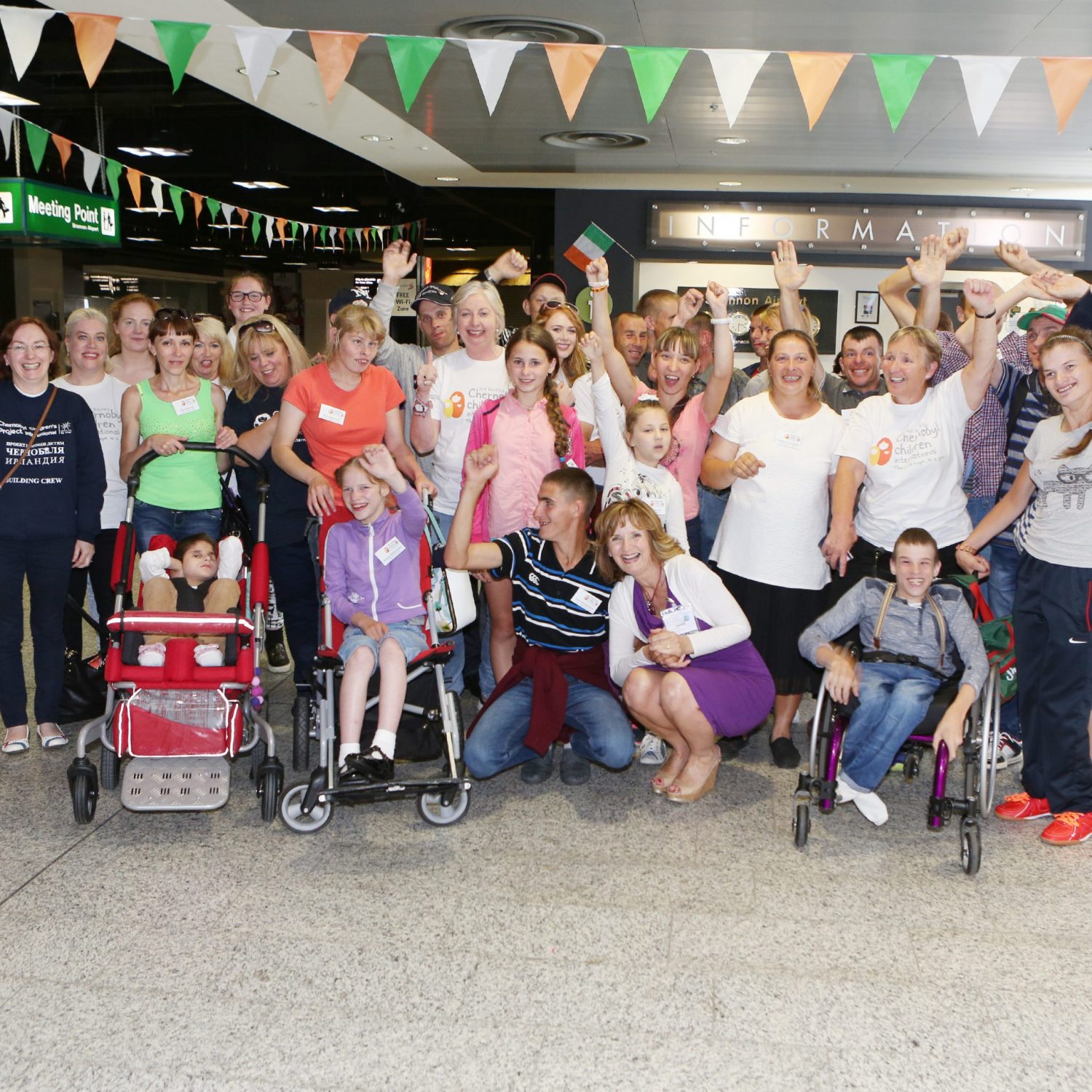 Adi Roche, along with host families, welcome 145 children with special needs to Ireland at Shannon Airport for Rest and Recuperation


A very special group of 145 children from Belarus landed at Shannon Airport today  as part of Adi Roche’s Chernobyl Children International’s (CCI) Rest and Recuperation Programme which takes children out of the Chernobyl affected regions for much needed respite care in Ireland with an extensive network of host families.

Tears of joy flowed in the arrivals hall of a bustling Shannon Airport as Irish families – from thirteen counties – were reunited with the Belarussian children and young adults whom they have opened their hearts and homes to for the past 3 decades, since the 1986 disaster.  Since then 25,500 children from Belarus and Western Russia have come to Ireland  on Rest and Recuperation programmes.

In 2015, 12-year-old Yana Bordorvskaya left the confines of state-run institution and travelled to Ireland for the first time to have much-need respite and care from the toxic environment in which she lives in Belarus.  It was during this stay, with the Dublin-based Hogan family, that young Yana stood on her feet for the very first time thanks to receiving the one-on-one care and affection she so greatly needed.

Yana was born blind and non-verbal.  She was given up at birth and placed in a home for abandoned babies until she was placed in the CCI supported Vesnova Children’s Mental Asylum at the age of 4.  Yana has a number of conditions including autism, epilepsy and scoliosis.  Because of  Yana’s blindness, walking and talking were made almost impossible at the institution. Yana was immediately sentenced to a life where she would be denied the chance to develop to her full potential. Even though Yana’s life could have been full of darkness CCI has found a way to introduce a little girl with a beautiful heart to the love of a family and the one-on-one care she needs.  Yana returns to Ireland today for a 4 weeks long holiday, which CCI are  is hoping will greatly  help her health and her development.

“The success of this, our oldest programme, is due to the commitment, dedication and kindness of volunteer host families all over Ireland who fundraise year-round to be able to open their homes and hearts during the Summer. There is so much love in action…it really is a beautiful thing. These volunteers are the lifeblood of the organisation and without them, we would be lost.”

The Summer Rest and Recuperation Programme gives the children, who come from impoverished backgrounds and state-run institutions, a health-boosting reprieve from the toxic environment and high levels of radiation to which they are exposed.  This is due to the absorption of radiation through the food chain and the ongoing re-contamination of the environment by forest fire in the effected regions.

Recent studies have shed much needed light on the benefits of Rest and Recuperation to the children who live in some of the world’s most radioactive contaminated lands in the Chernobyl affected regions.

Host families from 13 counties all over Ireland welcomed the children today for the start of their month-long, life-prolonging respite holiday, during which time radiation levels in the children drop by nearly 50 per cent and up to two years is added to their life expectancy.