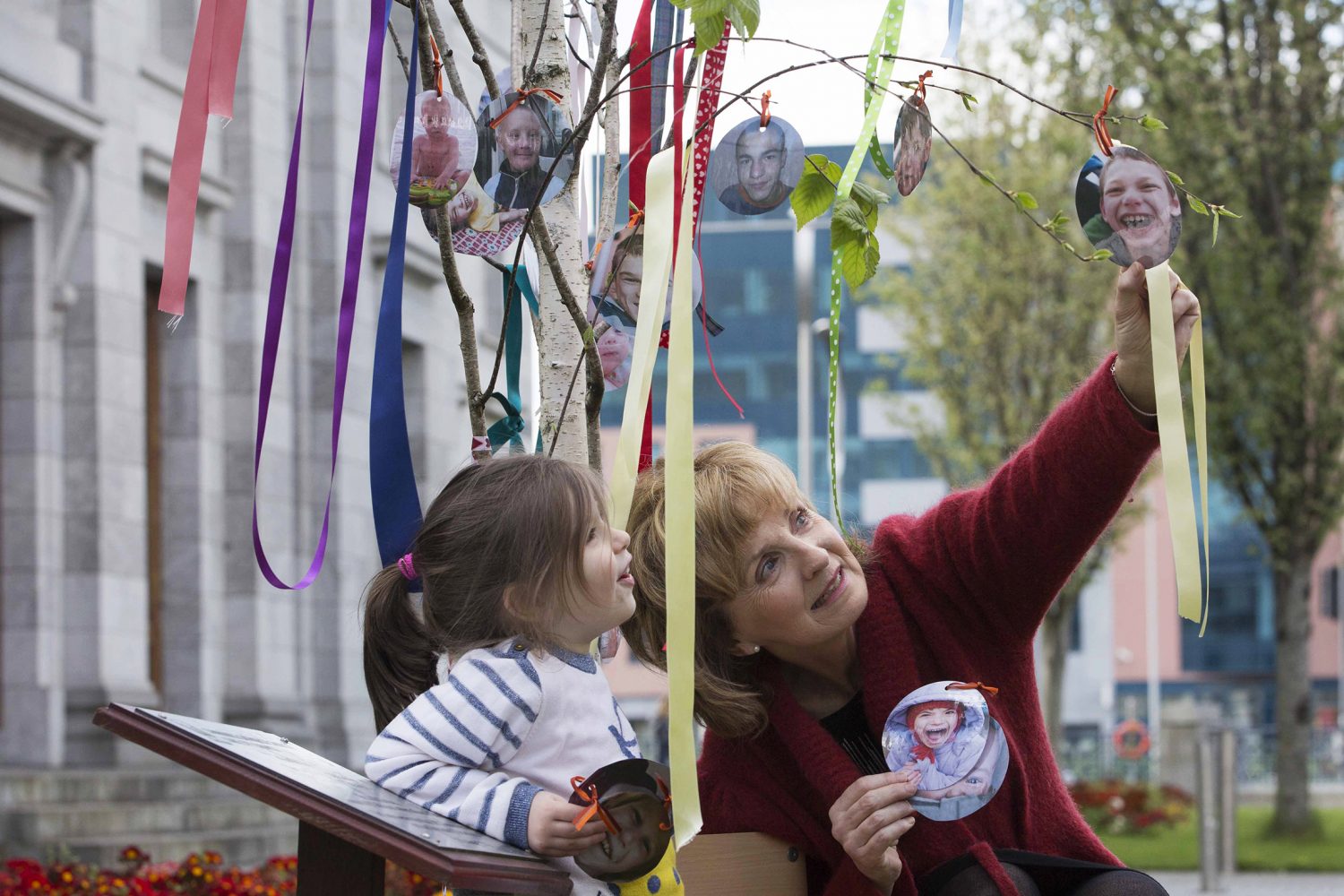 Adi Roche calls on children and families to remember the victims of the Chernobyl disaster.

“I respectfully propose that this day, the 26th of April, be pledged and designated as an official United Nations “Chernobyl Day” – a day that would always be honoured and commemorated.  A day for renewal and recommitment to discover new means, new initiatives to alleviate further the suffering of the people in the affected stricken lands.”

On April 26th 2016, the 30th anniversary of the accident at the Chernobyl Nuclear Power Plant, Adi Roche addressed a special session of the United Nations General Assembly and made the suggestion that, as part of a campaign to raise global awareness of the consequences of the Chernobyl accident, April 26th should be designated as day of remembrance for the victims of the world’s worst nuclear disaster.

Speaking at a ceremony of remembrance held at Cork City Hall, where local children hung photographs on the Silver Birch Tree planted by Adi upon receiving Freedom of the City last year, Adi said;

“Sadly, the aftermath of the Chernobyl accident that we’ve witnessed since 1986 is not something that has gone away; while the accident itself is a thing of the past, Chernobyl remains an unfolding tragedy that will affected the stricken regions for generations to come.  Chernobyl is forever.”

“There has always been a special place in Ireland’s heart for the children of Chernobyl and ‘Chernobyl Disaster Remembrance Day’ is our legacy to the victims of the accident.  This day of commemoration is so much more than one day – it is the world’s way of telling the past, current and future generations of Chernobyl victims that they are not alone.  Ireland has always had a unique, forward-thinking response to Chernobyl and let us recommit to that legacy on April 26th.  I ask that families and children all over Ireland take a moment to remember”

Some of the 31 children who were remembered at the Cork ceremony were taken into the care of Irish supported orphanages and Day Care centres in Belarus; others were supported in their homes by community care teams and some had lifesaving cardiac surgery during Irish funded “flying doctor” missions to Ukraine. Sadly, others, who found love and care in CCI supported hospices died and are remembered today in Belarus and Ireland.

On April 26th, the 31st Anniversary of the accident, the global community will be welcomed to come together for the first time, by the United Nations, to commemorate the disaster and remember the generations of victims who have been and will be affected for years to come. Adi is calling on Irish families and children take a moment of remembrance on this historic day.

As initiators of the day of commemoration the Cork-based charity, who are the only United Nations recognised NGO working in the Chernobyl affected regions, are co-organising a photo exhibition and round-table discussion at the United Nations headquarters in New York due to be attended by United Nations Secretary General Antonio Guterres.

A series of events are also taking place to mark the historic day in Ireland; President Michael D. Higgins is expected to release a statement supporting the Irish-initiated Day of Remembrance.  Prominent figures from the Irish music industry, such as Paul Noonan, Gavin Class and Maria Doyle Kennedy, are gathering for a once-off special concert in Kilkenny to mark the 31st Anniversary of the world’s worst nuclear disaster and raise vital funds for CCI’s life-saving programmes in Belarus and Ukraine.