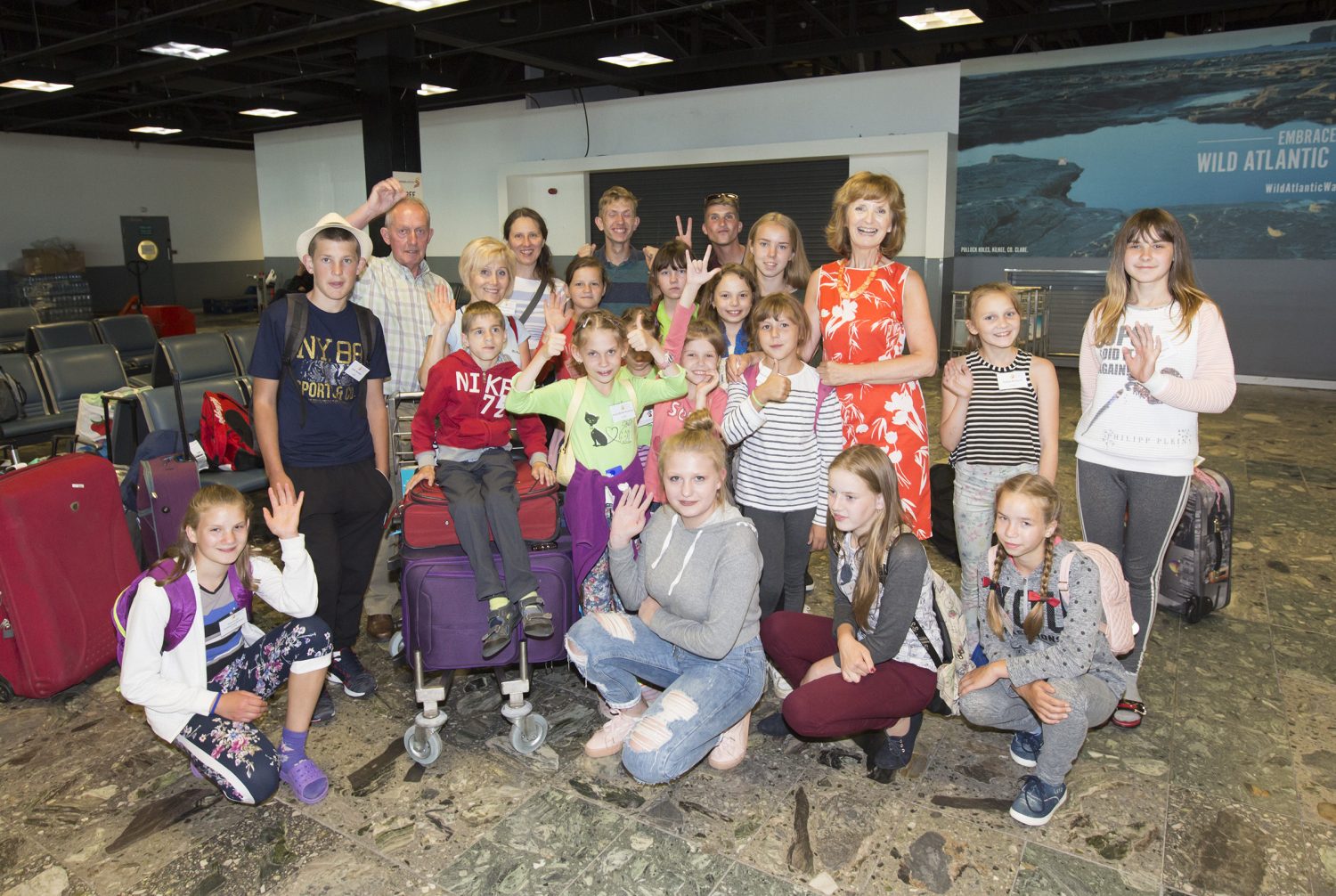 As World reels from the impact of ‘Chernobyl’ series, Shannon airport welcomes 120 ‘Chernobyl children’ to Ireland for Summer Rest and Recuperation


Following the conclusion of the chilling HBO ‘Chernobyl’ TV mini-series, a very special group of 120 children from the Chernobyl affected regions of Belarus will fly into Shannon Airport on Tuesday, 25th June as part of a long-standing campaign by Irish host families to prolong their lives against the ongoing effects of the world’s worst nuclear accident.

The children are third generation victims of Chernobyl and live with health, societal, economic and environmental fallout every day. Their Rest and Recuperation stays in Ireland, funded by Adi Roche’s Chernobyl Children International (CCI), have been organised each year since 1991. Ireland is now acknowledged as the country which has provided the most valuable ongoing aid and advocacy support for the victims of the Chernobyl disaster and continues to be at the forefront of an international campaign, through the United Nations, to focus attention on their plight.

Irish families – from nine counties – will reunite with the Belarusian children and young adults whom they have opened their hearts and homes to for the past 3 decades, since the 1986 disaster.  Since then 25,500 children from Belarus and Western Russia have come to Ireland on this flagship programme.

The Summer Rest and Recuperation Programme gives children, who come from impoverished backgrounds and state-run institutions, a health-boosting reprieve from the toxic environment and high levels of radiation to which they  have been exposed. During the month-long stay, radiation levels in the children drop by nearly 50% and up to two years is added to their life expectancy.

Speaking ahead of the group’s arrival, Voluntary CEO of Chernobyl Children International Adi Roche said, “Our wonderful volunteers have opened their hearts and their homes to these children every summer. These are children who so desperately need our help.  While the Chernobyl accident happened 33 years ago, the consequences last forever”.

“It has been our pleasure and privilege at Shannon Airport and Shannon Group to be part of the welcome for the Chernobyl children and their host families over the years. The sense of excitement here on the day is palpable, and our own staff are hugely invested in the event.  The success of this programme which started back in 1991 is a fantastic endorsement of the work of Trojan Adi Roche and the Chernobyl Children International team. With many of the children regular visitors to Shannon each year, it is more like a wonderful family homecoming,” says Mary Considine, Acting CEO, Shannon Group.

Many of the children, who will spend the month with loving host-families in Ireland, reside in Vesnova Children’s Mental Asylum – an institution for abandoned children which was hidden in a veil of secrecy during the years of the Soviet Union.  It is now the base for the Cork charity’s most ambitious programme ever – the Restoration of Rights Programme and Life Skills Home which the charity hopes will offer children the hopes of a safe alternative to life in an orphanage over time.

“We have two young men here who, despite every obstacle thrown in their way, have had earned their Right to live outside an institution.  They are our heroes and have set precedence for so many others behind them. It’s a light at the end of a tunnel that we never thought we would see.”

“Our work on de-institutionalisation and finding alternatives to orphanages, is the most important body of work that we have ever undertaken.  It is amazing to see some of the children and young adults here learn to read and write and for the first time have their abilities and skills be the focus, rather than any disabilities they may have.” Roche continued.

Since 1991, over 25,500 children from Belarus and Western Russia have come to Ireland through Adi Roche’s charity on this Rest and Recuperation programme.