Ninety-nine percent of the land in Belarus has been contaminated to above internationally acceptable levels as a result of the Chernobyl explosion. The contamination will not fade: plutonium, one of the radioactive elements released, has a half-life of 24,400 years.

The original 30-kilometre contaminated exclusion zone has now been expanded to 70 kilometres. This expanded zone is called ‘Death Valley’ by the locals. It is the world’s most radioactive environment, in which 2,000 towns and villages will lie eerily silent and uninhabited forever.

Andrei, a farmer from Khoiniki, Belarus, remembers:
‘You see, they knew, the bees I mean, they knew something was wrong, but we didn’t. Not until it was too late. I remember that morning well. I went out into my kitchen garden as usual; it was a lovely spring day and so beautiful. It was in full bloom; it’s my very favourite time. The garden all dressed in wedding white. But something was wrong, something was missing, some old memorable sounds.

Ah, you see, I realised something unusual, it came to me that I couldn’t hear the sounds of bees. This was something strange. My hives were over there, see, rows of them under the apple trees; they’re rotten now, but not then – we had very good honey to sell and eat. What is it? What’s wrong? I said it to Nina, my wife, and she said, “It’s bad omen, Andrei; it’s not right.” I put on my mask as usual and started checking the hives. They were there alright, sitting in the hives, not making a sound. 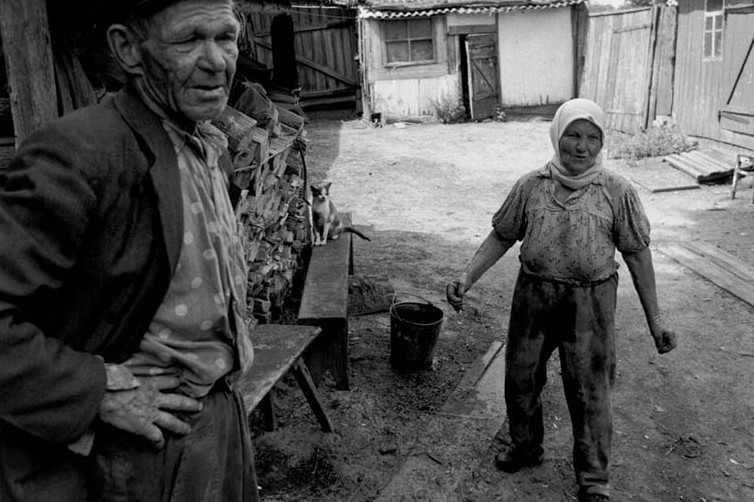 There was no buzzing. So strange their silence I thought. They are sick; maybe they have been poisoned from the fields, I thought. It was only when they came to take us away, three weeks later, that they told us there’d been an accident at the atomic station over there.

You see, that is just 15 kilometres from our kitchen garden. It’s no distance for that radiation to come over here. We didn’t know that, but our bees did. Something horrible happened so quietly and naturally.’