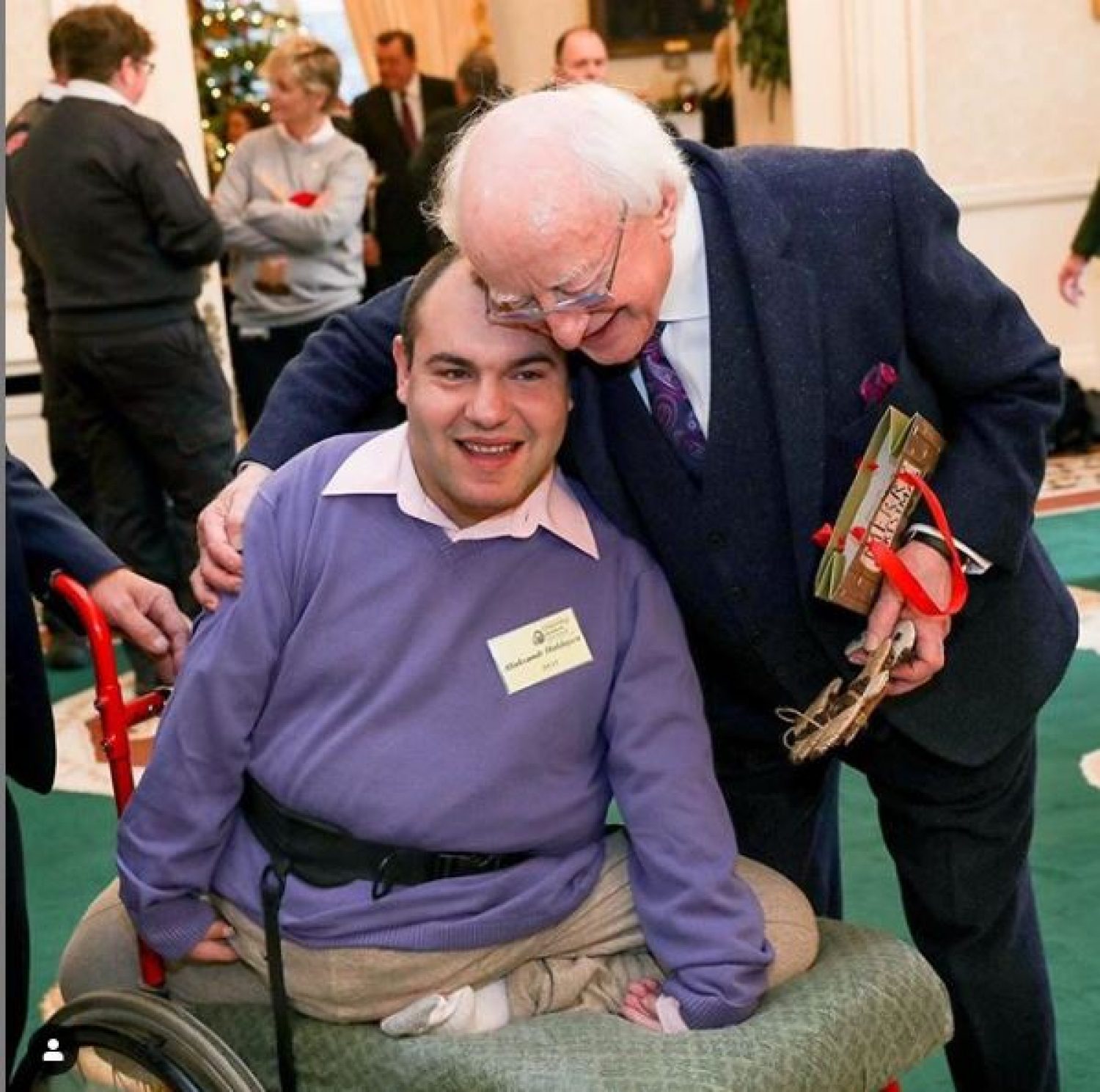 Chernobyl survivor gives emotional thanks to people of Ireland, as President of Ireland Michael D. Higgins welcomes Chernobyl children to Áras an Uachtaráin


19 December 2018: A special group of Chernobyl children were given the surprise of a life-time as the President of Ireland Michael D. Higgins opened the doors of Áras an Uachtaráin for a festive celebration upon their arrival to Ireland this afternoon.  The visit takes place less than 24 hours after the group arrived into Dublin Airport for a health-boosting Rest and Recuperation visit with Adi Roche’s Chernobyl Children International charity.

In an emotional meeting, Chernobyl victim Sasha Godalev praised Irish volunteers and donors as he shook the hand of Ireland’s President, Michael D. Higgins today.   Sasha, who has lived his entire life in a wheelchair and lives in an Independent Living Home pioneered by the Cork-based charity, has become an ambassador and spokesperson for the victims of Chernobyl;

“I have dreamed of one day of meeting the President of Ireland. Ireland has been so good to me and so many of us, and we are so grateful. I never believed this day would happen. If you believe enough, your dreams really can come true.  Thank you from the bottom of my heart.”  Sasha exclaimed.

Godalev will spend his Christmas in Bray, Co. Wicklow with the loving Meaney family.  The Meaneys are one of just dozens of volunteer host families who are opening their hearts and homes to Chernobyl Children for Christmas.

Speaking about the exciting reception at Áras an Uachtaráin, as well as the arrival of the Rest and Recuperation children, CCI’s Voluntary CEO Adi Roche said;

“These children spend their days incarcerated in institutions and segregated from society, so to see them welcomed by President Higgins to the heart of our nation is so beautiful and poignant.  President Higgins has always been a stalwart supporter of the children of Chernobyl and I cannot find the words to express how grateful we are to him for this.”

Roche continued with a glowing testament to Irish volunteers, who have welcomed over 25,500 children to Ireland since the 1986 disaster;

“The time with Irish families not only boosts their immune systems, but also helps children develop practical life-skills and social skills…it’s invaluable and it’s all thanks to our dedicated army of volunteers and supporters who have never forgotten Chernobyl’s children.”

President Higgins was the first world-leader to offer his support to the CCI-initiated ‘United Nations Chernobyl Disaster Remembrance Day’, which was developed following Adi Roche’s address to the United Nations General Assembly on the 30th Anniversary of the Chernobyl accident in 2016.  In a letter of support for the inaugural commemoration, President Higgins stated that “Adi Roche’s Chernobyl Children International has become a world leader in supporting and advocating for the children who were affected by the Chernobyl disaster across the stricken regions.”

Dozens of families – many of them having travelled to Belarus to work on building and nursing projects over recent years – in Dublin, Galway, Limerick, Cork, Mayo, Kilkenny, Meath and Wicklow will host the children over the Christmas before they return to Belarus in January.  Since 1986, CCI has spent over €105 Million on humanitarian and medical aid programmes in the regions of Belarus, Ukraine and Russia.