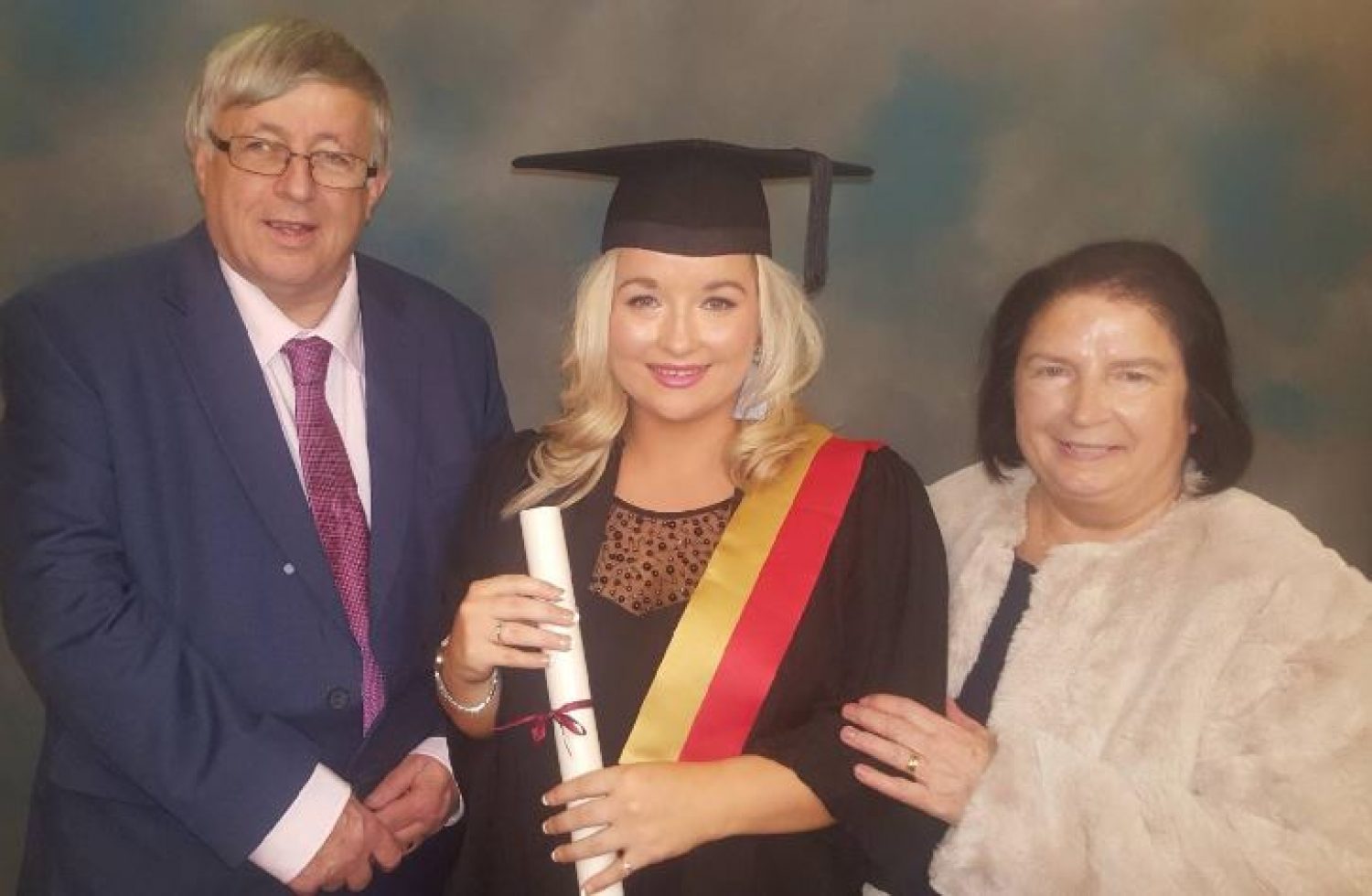 
Today marks a very happy day for us in CCI as we celebrate the graduation  of Anna Gabriel from Cork Institute of Technology (CIT).  Anna is now a qualified accounting technician.

Today is an especially proud day for Anna, as she has overcome incredible adversity in her life.

Against all odds, Anna began her young life in large, bleak, inhumane orphanage in Belarus, came to Ireland to loving adoptive parents – and her life transformed beyond recognition. Today, Anna is an ambassador extraordinaire for the child victims and survivors living in the Chernobyl affected region of Belarus.

In 1992 Chernobyl Children International (CCI) travelled to a baby orphanage in Minsk, Belarus where they met and fell in love with Anna. She was a tiny baby, born completely deaf with just ear flaps and no ear canals, her legs were severely deformed and she had an extra finger on both her thumbs.  Anna suffered from severe social deprivation and neglect. To this day, Anna has two extra fingers and has only one kidney.

At the orphanage, Anna had little chance of survival as the standard of medical care was extremely poor and if she reached the age of four she would be automatically moved to a mental asylum. On the eve of Anna’s fourth birthday, CCI set to work to bring Anna to Ireland so that she could avoid a fate of languishing in an asylum forever. She would not have survived.

On January 6th 1996, Adi Roche brought Anna into Ireland. At Shannon Airport on a cold and winter day, Anna met her new Irish family, the Gabriels, who were waiting with open arms. Due to her complex medical problems, Anna used a wheelchair most of the time. She couldn’t hear but once in Ireland her life changed. She underwent arduous medical assessments and spent long periods in hospital. She had a hearing aid and bone conductor fitted which improved her hearing way beyond expectations and also helped her speech.

Given that there was no Adoption Agreement between Ireland and Belarus, CCI faced an overwhelming challenge. Over a 4 year period, CCI opened the channels of communication and bureaucracy and initiated negotiations to open adoptions. For over 3 years while the Agreement was being negotiated, little Anna’s life was in limbo. With no official Adoption Agreement in place, her future was uncertain but she bore the long waiting period with huge bravery and courage.

At the age of 13 Anna started secondary school in Bandon, County Cork . At that time she was only 3ft 5inches tall and she felt like there was little hope she would ever be the same height as her friends but that all changed when she met an orthopaedic surgeon who changed her life. Doctor Andries De Bont fitted Anna with two prosthetic legs from her hips to her toes. She was finally able to be whatever height she wanted to be and today at the age of 18 she is 5 ft 3 inches tall.

Anna is pictured here with her parents, Robert and Helen Gabriel, at her graduation ceremony earlier today in Dublin.

Congratulations Anna from everyone at Chernobyl Children International!