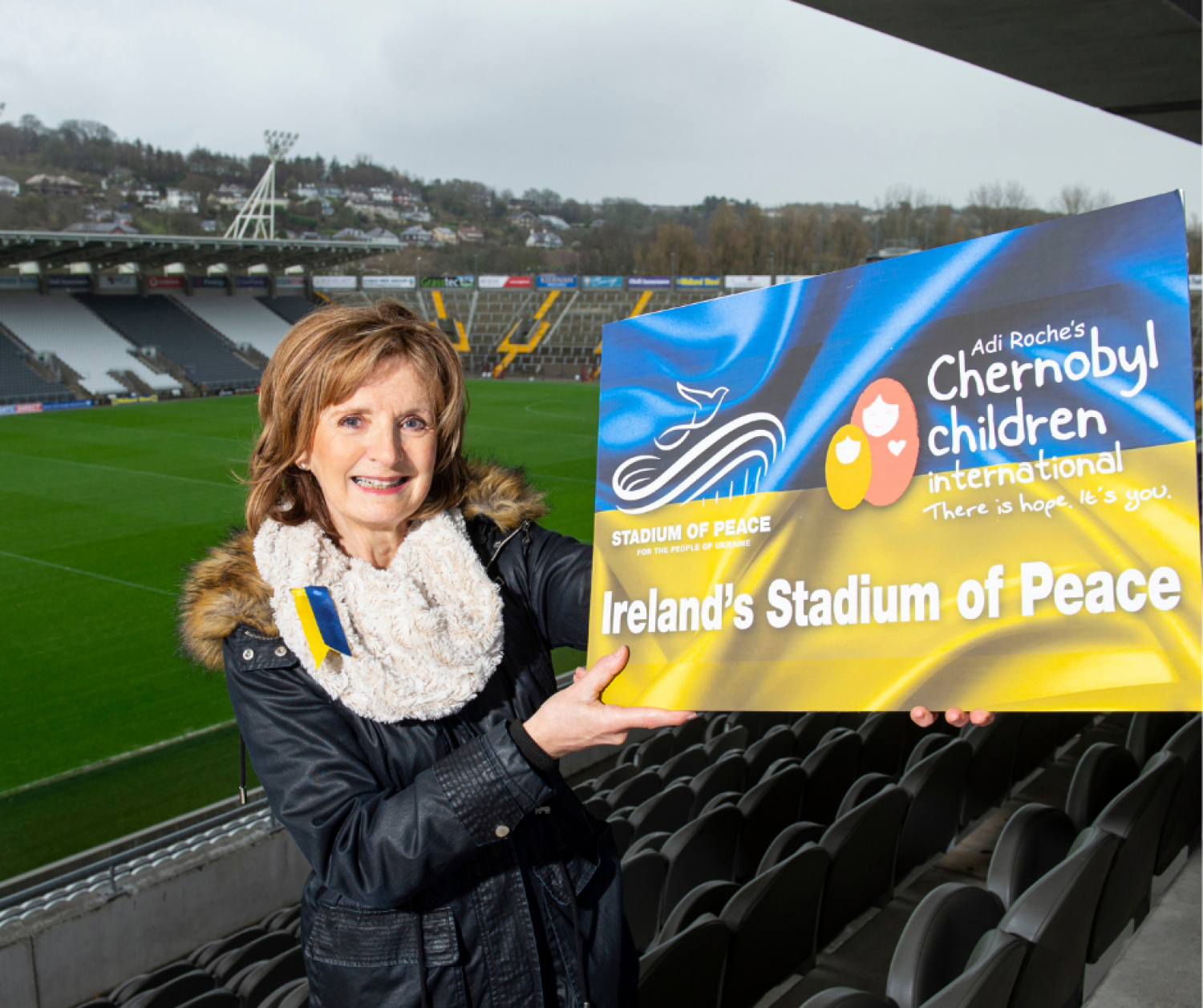 
Three top Irish charities, Adi Roche’s Chernobyl Children International, UNICEF Ireland, and the Irish Red Cross, have come together to call on the people of Ireland to take their seats at a Virtual Stadium of Peace which they have created to help donors to show their support and solidarity for the people of Ukraine.

The three humanitarian aid organisations are hoping to turn the virtual stadium green by the time the final whistle blows on Ireland’s closing Six Nations Championship game against Scotland on Saturday, 19th March.

Anyone can make a donation to buy a seat at the Virtual Stadium of Peace and each donation will help to turn a piece of the stadium green. The virtual stadium is modelled on the design of the Aviva Stadium and the concept is to create a sea of green around a pitch sized Ukrainian flag.

Supporters all over the world can buy their seats by making a simple online donation of €5, €10, €20 or their preferred amount at www.stadiumofpeace.com. Seats are selling fast, and the initiative has already raised €10,000.

The three organisations have also teamed up with over 7,000 pubs across Ireland to raise much needed funds during Ireland’s Six Nations Championship game against Scotland, thanks to the support of the Vintners Federation of Ireland and the Licensed Vintners Association. Special QR codes will be placed on bars and tables throughout their premises, which customers can scan to donate and buy a seat at the Virtual Stadium of Peace, wherever they are gathering to watch Ireland take on Scotland on 19th March.

“We have all watched in dread as the horrific invasion of Ukraine unfolds. In the ‘fog of war’, it is hard for us all to cope as we remain in the early days of a new reality that will unwind for weeks, months and years ahead. Many people have contacted the three charities to voice the question that is being asked the world over: ‘What can I do to help?’,” said Adi Roche, Founder and CEO of Chernobyl Children International.

“Buying a seat at the Virtual Stadium of Peace is just one way to help, to donate and to show solidarity with the people of Ukraine. Your help will provide immediate assistance to those in need; you can provide food for the hungry, a warm bed for a child, and medicine for the sick. This is Ireland’s Call to stand shoulder to shoulder with Ukrainian people and we are calling on Irish people all over the world to do what they can to spread the word and to help turn our virtual stadium green,” she added.

Commenting on this initiative UNICEF Ireland Chief Executive Peter Power said “UNICEF Ireland is delighted to be associated with the fundraising event for Ukraine. Like everybody else, UNICEF is shocked by the terrible violence we are seeing in Ukraine. There is no doubt that there is a huge appetite by the Irish public to show solidarity with the people of Ukraine.”

Liam Dwyer CEO of the Irish Red Cross said, “We are hugely appreciative of the generosity of the Irish people in contributing cash and pledging support for the Emergency Humanitarian Appeal for Ukraine given the very difficult conditions there and at the borders.”

The Virtual Stadium of Peace will remain open until the final whistle in Ireland’s Six Nations Championship game against Scotland on 19th March. Go to www.stadiumofpeace.com to make your donation, to take your seat and to stand shoulder to shoulder with the people of Ukraine.