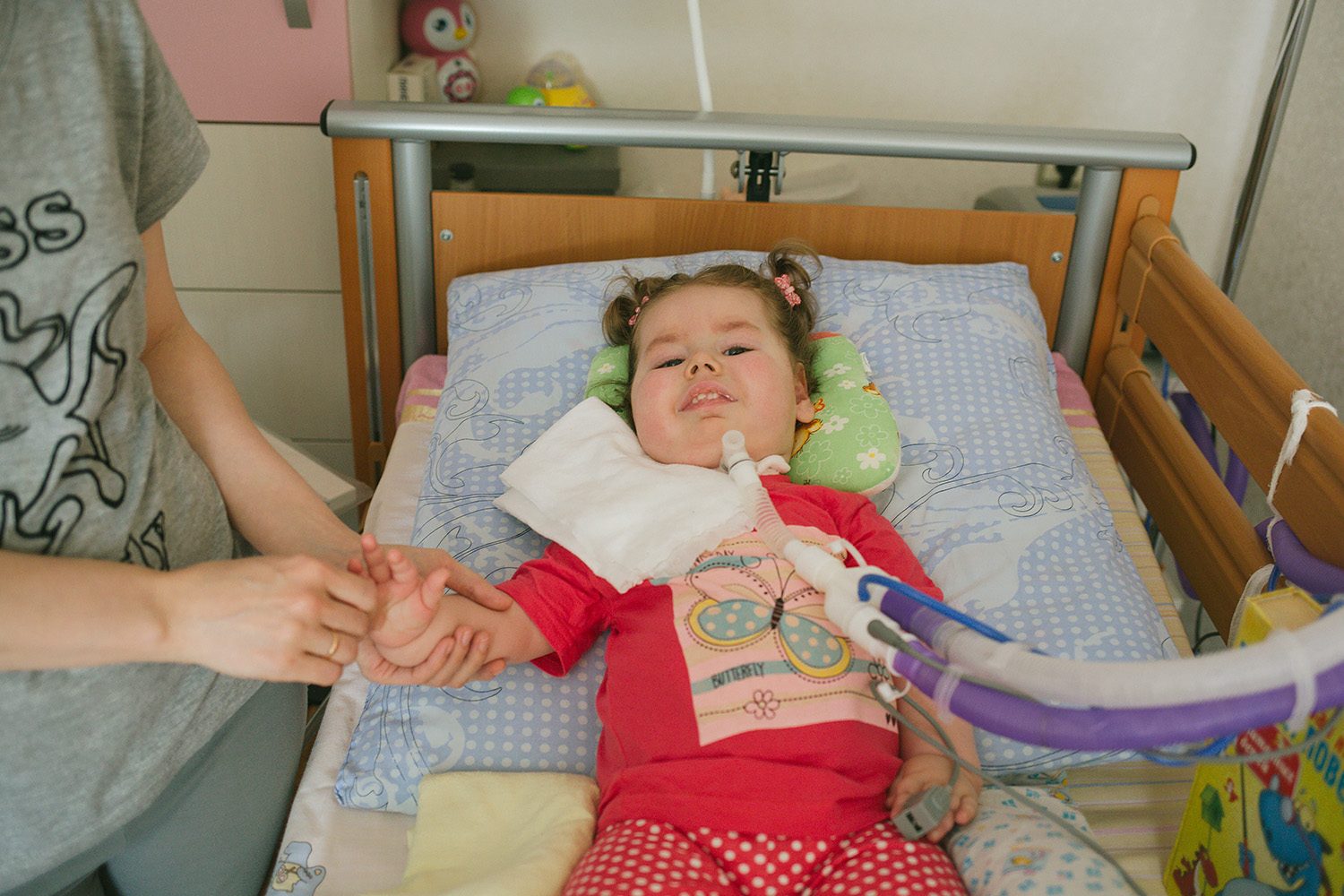 Terminally ill ‘Granddaughter of Chernobyl’ is supported in the loving comfort of her family home, for her final journey in life


“Excuse my appearance, I’m very tired today,” Lena says as she opens to door to her apartment in Gomel, Belarus.  “I have to wake up every hour at night to make sure Sasha’s oxygen is working.”

2-year-old Sasha Vlasova has a rare condition that affects the body, but not the brain.  Her prognosis is extremely poor – 95% of stricken children do not live to see 2 years old.  Sasha cannot move or speak, but she is fully alert.  Her eyes follow her mother’s every move and her sharp mind is demonstrated by her ability to communicate with Lena through blinking.

Sasha and her family are supported by Irish charity, Chernobyl Children International (CCI), and their Hospice and Palliative Care Programme.    Through this programme, CCI supports families with children who have profound and often life-limiting disabilities and conditions.  Multi-disciplinary outreach teams deliver medical, therapeutic and personal services in the children’s homes so that they can have high-standard care in the comfort of their loving family homes.  Daily and weekly therapeutic and nursing visits, monitoring and social supports make it possible for these high-risk families to stay together as a unit rather than having the children enter faceless, grim institutions.

“Sasha needs to be watched 24 hours a day.  I’m alone — Sasha’s care is very expensive, so my husband Alexei had to go Russia where he can get paid enough to support Sasha’s care.  CCI sends us physical and massage therapists, it helps her relax and minimizes her discomfort. An Irish company donated breathing tubes, enough to last us for a year.”  Lena continues.

“Without CCI’s help, Sasha would have to go live in an institution — it’s hard, but we are so grateful to have our family together.”

Voluntary CEO of Chernobyl Children International, Adi Roche, explains how Sasha’s situation is due to an inherited legacy from the fallout of the devastating Nuclear accident of 1986;

“We call Sasha the ‘Granddaughter of Chernobyl’ because both of her parents were also children deeply affected by Chernobyl.  Her Mama, Lena, has had her Thyroid gland removed, which was cancerous, and she continues to suffer from further cancers.”

“Sasha is an extraordinary girl, but tragically, she is an example of Chernobyl Lineage…passing the effects of Chernobyl from generation to generation.”

Research carried out by eminent Belarusian scientist Professor Yuri Bandazhevsky has shown that radioactive elements crosses the placental barrier during pregnancy, proving that the fallout from Chernobyl has become a cross-generational problem.  Professor Bandazhevsky was the first scientist in Belarus to establish an institute to study the health of people and in particular children in the aftermath of the Chernobyl nuclear disaster.  Bandazhevsky’s research revealed that even relatively small doses of radioactive particles of radioactive element Caesium 137 can disrupt the functioning of vital systems in the body.